Test Everything. Hold fast to that which is Good

Do not say to yourself, ‘My power and the might of my own hand have gained me this wealth.’ 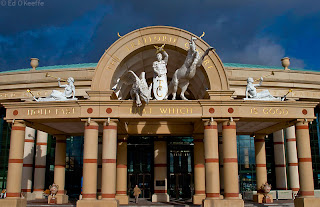 Students of Christian praxis and the vitality of the church cannot fail to notice that wherever the church is waning, it is in circumstances where the Victory of Man over Creation through his technological mastery, and (in the Boom Times) his apparent  effective marshalling of the so-called 'Laws of Economics', is most evident.

In those places where we seem to have got away with stealing Fire from the gods and the thread of life from the fates, writing for ourselves a Roman story of Immortality - faith seems to have been fatally infected with the spirit of the age. Now in these days, when as Jamie Smith notes, the Mall has its own liturgy and we may buy our identity, faith is all too often expressed in terms of consumption. Church becomes an imitation of the world around it, but a pale one. The world does a far better job of being the world than the church does.

Indeed the world mocks the church by stealing its clothes, its fine temples and inspiring texts, as the entrance to a mall in England so witheringly does, using a text from that most apocalyptic letter of Paul's to the Thessalonians. "Hold fast to that which is good" 'Test Everything, hold fast to that which is good - check where the bargains are to be had and go get 'em!'

The church in running after these things shows she has lost all sense of who she is, and her children likewise, often pursuing with as much vigour the consumer dream as those around them. I wonder how many Christians have failed to shudder as they passed through the portals above?

When the children of Israel were still in the wilderness, but stood on the edge of the Promised Land, Moses held the crowds back and told them, "before you go fleeing into this store house filled with good things, I'm warning you, Don't forget who really feeds you, who really put clothes on your back and food in your bellies" But, like children getting a final safety briefing before leaping off the bus to visit a theme park, they're going 'yeah, yeah, yeah - we remember, "don't forget who got us here" - whatever. Now can we go ?', and off they go into the lush land and promptly forget.

Put another way, they'd never really learnt to believe, even after forty years. They just wanted to get The Wilderness bit over and done with. And we may well feel the same about Lent. A tiresome nuisance we just want to be shot of. Except it is a place of Gift. The place where Life is stripped to its essentials, reveals the essentials of Life.

This past ten days of Lent, I have been privileged to accompany someone on a journey of faith, exploring what might be possible when everything seems to be lost, when the lights go out humanly speaking. Through this journey we have made the most wonderful discovery, that when you take away everything, all you are left with is God . . .

It seems there is no greater threat to faith than a rich life in human terms. Nothing more adept than blinding our eyes to the Good than the good. Why is it that we seem so obsessed for example in our days with 'the problem of suffering' when those in earlier times suffered far more and understood it not as an obstacle to faith, but an opportunity for it? Why do we think our world has fallen apart when a marriage or anything indeed, fails to live up to expectations? When we are thwarted in our Promethean dreams of perfection. Put another way, when we seemingly have it all, it only takes the smallest of flies in the ointment for us to forget God, revealing that in truth we have chosen to be our own gods.

And what is more, the further we go down this path, the more we move away from any meaningful observation of Lent. Not realising something is seriously wrong, we've given up on the inconvenience of our annual check up.

Yet Lent turns the consumer model on its head - for we do not test, we are tested. We do not put God to the test as is so commonplace in these days, often with the encouragement of those who consider that they speak for Him. Rather we allow Him to put us to the test, for we want to know is our faith the real thing - when all is stripped away is it true for us that He is our Hope? Not is He True, for we know that, are We?

Lent is but forty days, but for it to have done its work we need to come to the point where we would be happy for it to go on for ever, because in the Wilderness we have come to know God and His Goodness and that is worth more to us than Gold or Silver. We have found the Promised Land without leaving the desert. Having tasted - we hold fast.

Lent is only ten days gone - several weeks still stretch before us - Gift if we will have it.
Posted by Eric Kyte at Saturday, March 03, 2012

Email ThisBlogThis!Share to TwitterShare to FacebookShare to Pinterest
Labels: Consumer religion, Deuteronomy 8:17, Hold fast to that which is good, Lent, Moses, Spirit of the age, Trafford Centre